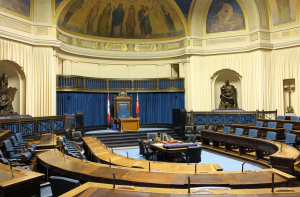 The government was well aware that many were dreading yesterday’s budget: Non-profit organizations, healthcare workers, educators and public sector workers in general were bracing for Filmon flashbacks. Did the Conservative team take those fears into consideration when putting together the budget?
It might well have. Although it takes days to understand how the budget will filter down to all concerned, there were no obvious flashpoints to grab the public’s attention. To a large degree that is because the big bad news items were dribbled out before the budget: the attacks on labour, weakening of drinking water regulations, the 900 job losses at Manitoba Hydro, the closing of 3 emergency rooms in Winnipeg and the cancellation of much-needed healthcare infrastructure such as the Lac Du Bonnet personal care home and the new CancerCare Manitoba facility are examples.
All these moves have obvious implications for the budget, but they are now last week’s or month’s news. This scatter bomb method of delivering bad news may work in the short run, but eventually people will feel the cumulative effect of these cuts. This is especially true when considering the cancellation of tax rebates which is just another way of increasing taxes.
For a government determined to create jobs and keep professionals in the province, the cancellation of the tuition fee income tax rebate is an odd move. It claims that there is no evidence that the rebate works, but neither is there evidence that it doesn’t. Certainly anecdotal evidence abounds that it does work. Students are already complaining that the move is particularly onerous coming as it does after the announcement that the tuition fee freeze is over and that funding to post-secondary institutions has been frozen. With these cuts and the loss of 900 good jobs at Manitoba Hydro, we can expect Manitoba’s youth to be looking for greener pastures.
Legislative changes, interference in collective bargaining and healthcare and job cuts aside, it’s been tricky to get a read on how hard a line this government will take on a variety of issues. In the Finance Minister’s pre-budget press release, there was more discussion about the importance of charities than there was about the role government should play. That message is an important one.
Premier Pallister has been upfront about his plan to use more Public Private Partnerships (P3s) and removal of the NDP’s P3 legislation ensures that the public oversight of such deals is also removed. The unimpeded incursion of private healthcare clinics, fears that the air services branch will be privatized and promises to use Social Impact Bonds to provide social services all adds up to a plan of sorts.
The plan is to shrink government, transfer public assets to the private sector and shift responsibility for Manitoba’s less fortunate from the government to the charity sector. All this in the name of slaying the deficit.
The one message that has been clear and consistent is that no energy will be spared in reducing the deficit, which they classify as ‘alarming’. But it’s not the size of our deficit and debt per se that counts; it’s their size relative to the economy at large, or our GDP. The budget papers pin the deficit at $840M and our debt/GDP ratio for 2017/18 is forecast at 35.7%. While it’s true that this ratio is increasing, it remains healthy and if GDP grows faster than forecast – which it very well could, the ratio will be lower.
We also need to know how much it costs to service our debt. Debt servicing is pegged at 1.4% of GDP, up a mere one tenth of one percent, hardly alarming.
For a government claiming financial crisis, it’s odd the budget doesn’t talk more about revenues. Other than assuring that there are no tax increases (except for the students’ tax rebate cancellation), there is no discussion in the three-year forecast about potential revenue sources. We know that carbon pricing is imminent; that will bring hundreds of millions of dollars into the public purse. Once marijuana is legalized it is estimated that the Province will collect $25 million /year and it still has $500 million owing from the federal government for disaster assistance. Including these revenue sources in future forecasts would have allowed them to paint a much more optimistic picture. It is significant that they chose to leave them out.
Rather than thinking of this budget as master plan of where this government is going, it makes more sense to see it as a tool being used to advance its philosophy of small government, privatization and low taxes. If we want a sense of the true scope of their strategy, we have to put the budget in the context of previous announcements, legislative changes and press releases. Only then does a clear picture begin to emerge.
Lynne Fernandez holds the Errol Black Chair in Labour Issues at the Canadian Centre for Policy Alternatives Manitoba