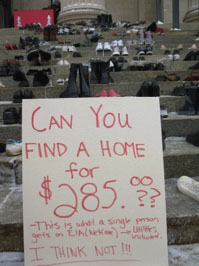 By Josh Brandon and Jesse Hajer

This was the text from a placard placed on the front steps of the Manitoba legislature, in front of dozens of shoes piled up the front steps of the Manitoba legislature, in December of 2013. This was one of many actions taken by Make Poverty History Manitoba and the Right to Housing coalition, aimed at increasing housing benefits for Manitobans in the social assistance, or Employment and Income Assistance (EIA) program. This campaign culminated in the introduction of Manitoba’s Rent Assist benefit, a landmark achievement in the fight against poverty in Manitoba.

Last July, we coauthored a report that examines the organizing history and context leading up to the implementation of Rent Assist. Previously we had written about the uniqueness of the Rent Assist program, and its radical and novel approach to housing assistance. In this most recent study, we were motivated by comments from the organizers behind the campaign that there was a need to document not only how Rent Assist works, but how it came about. We, along with advocates, think it is important to understand how bold policy changes that aim to address growing inequality and precariousness end up becoming reality.

Rent Assist was launched by the Selinger government in 2014. The program met demands of advocates to increase EIA shelter benefits to 75 percent of median market rent. For individuals and families on EIA, this made a big difference. For example, a single parent saw their benefits increase by $236, and a single person by $112 per month, reducing the affordability gap approximately by half over a two-year period. Prior to Rent Assist, as rental rates increased rapidly, EIA recipients had seen their rates effectively frozen for decades, with only a few minor increases, and many stories of families using food allowances to cover rent.

Rent Assist did much more than just increase shelter benefits for social assistance recipients. The program also provides support for low-income households outside of welfare and also led to large improvements for many. For example, a single parent with two children not on social assistance went from zero benefits to up to $742 per month. Increased rates and broader eligibility contributed to a large increase in provincial funding to support the basic needs of low income Manitobans. By 2017, the amount al¬lotted in the provincial budget for employment, income and rental assistance had increased by nearly $200 million.

Our report discusses three key factors that we believe made Rent Assist possible. The first was the sustained and broad-based campaign by community advocates. While the campaign included stakeholders that have long advocated for poverty reduction, it also brought together a vast array of over 145 organizations including faith-based groups, business organizations, and health and education providers. This coalition included partners in business and other sectors not traditionally associated with advocacy on poverty issues.

The second factor was a provincial government broadly receptive to addressing the social housing needs of low-income Manitobans, although resistant to simply increasing social assistance benefits. The government had long noted concerns with shelter benefit increases just going into landlord’s pockets, which Rent Assist partially addressed by delinking the benefit from rent actually paid. The bigger concerns however were the disincentive effect of higher benefits, keeping more people on welfare longer, and the equity issue for the working poor struggling to make a living without relying on EIA but with incomes too high to quality for EIA. Rent Assist addressed these issues by moving benefits outside of welfare, where benefits decline gradually as income increases. This logic was similar to that underlying the development and large increases in what is now the Canada Child Benefit, with recent changes by the Liberal government being credited for observed reductions in child poverty.

The third factor that was the changing broader political and economic context, both internationally and locally. In 1999, when the NDP was elected, welfare systems in Canada, the United Kingdom and the United States had recently been fundamentally reformed, making it harder for people to access benefits. In Canada this was enabled by Federal Government austerity measures and elimination of the Canada Assistance Plan, and in Manitoba took the form of cuts, ‘workfare’ and ‘snitch lines’ under the previous Filmon government. Since then, awareness of growing inequality and its detrimental social and economic consequences have increased significantly, creating space for bolder policy ideas. Locally, the change in leadership in the NDP in 2009 (which resulted in Greg Selinger becoming Premier) also coincided with big policy shifts in deficits, social housing, and eventually taxes, contributing to a more conducive environment to a program like Rent Assist.

Our report also examines recent changes to the Rent Assist Program under the Progressive Conservative government, who initially endorsed the community campaign, with Premier Brian Pallister at one point taking credit along with advocates for its implementation. But since taking power, the government has made significant changes that have reduced benefits. Participants are now expected to spend more of their own income on rent, it is harder to qualify, and some households have seen their benefit rates frozen. For some families these reductions are quite substantial. For example, a single parent with two children at the poverty line receives $152 less per month due to these changes.

Despite these cuts, Rent Assist remains one of the most robust shelter allowance programs in Canada. By shifting a portion of the social safety net away from a ‘program of last resort’ model, to an income-tested entitlement program, Manitoba has created a more equitable and accessible program. Broad-based community and political support is helping to ensure its sustainability, at least to date. While only time will tell, we are optimistic that Rent Assist can serve as a model for provinces and advocates seeking to improve access to housing and poverty reduction more broadly.

Josh Brandon is a Community Animator at the Social Planning Council of Winnipeg, co-editor of Poor Housing: A Silent Crisis.
Jesse Hajer is a faculty member in the Department of Economics and Labour Studies program at the University of Manitoba. Both authors are Canadian Centre for Policy Alternatives – Manitoba Research Associates.