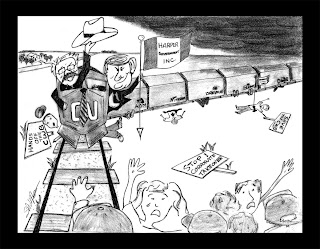 “It’s time for the wheat board and others who have been standing in the way to realize that this train is barrelling down a prairie track,” the Prime Minister said. “You’re much better to get on it than to lie on the tracks because this is going ahead. It’s time for the wheat board to go out in a dual marketing environment, to cultivate its customers and provide a competitive service because those customers are going to have choice in the future.” (Globe and Mail, Oct. 11, 2011)

The Harper government will be tabling a bill as early as this week which will take away farmers’ right to collectively market their own ‘Canadian Branded’ wheat around the world, and will hand it over to multinational corporations. The Harper government’s relentless, reckless and dictatorial campaign to get rid of the CWB is just one more example of how our democracy is being eroded. As Canadian citizens, we need to join together and stand up for integrity and the democratic principles we believe in.

Prairie farmers will be gathering just outside of Winnipeg at the Red River Exhibition grounds for their own meeting earlier in the morning, and many of them will make their way to the Wheat Board offices in a cavalcade to join the peaceful citizens demonstration.

Barbara Toews is a partner in a grain & oilseed farm in southern Manitoba and a Provincial Council of Women Manitoba board member.