Realizing the Potential of Public Transit 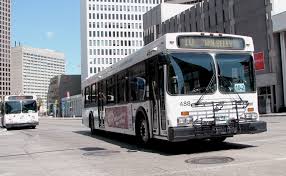 Last year’s municipal election accommodated a healthy discussion on public transit. It was largely agreed that efficient, frequent and affordable transportation creates a vibrant city and is necessary if we are to take climate change seriously. An efficient transit system is the key to connecting communities, but the ability of past City administrations to expand services to keep pace with urban sprawl is wanting. There are high expectations that our new mayor and council will finally bring Winnipeg’s transit system into the 21st century.

Since 1970, Winnipeg’s area has expanded by 80 per cent. Over the past 25 years, its population has grown by over 105,000 – a 15.4 per cent increase. More people need to travel greater distances: how has Winnipeg Transit responded to these demands? Unfortunately, not very well. The bus fleet has seen a net increase of 10 vehicles over 25 years. That’s right: 10 buses – a 2 per cent change, to accommodate a much larger city.
Inter-city comparisons provide some more reference for how well Winnipeg’s transit system serves us. Winnipeg has 570 buses. Edmonton has 942; Calgary – 989; and Ottawa – 936. These cities are somewhat larger than Winnipeg, but all have some form of light rail transit (LRT) to support the bus fleet.

Looking at the citizen-per-vehicle ratio confirms that Winnipeg’s fleet is too small. Ottawa’s ratio is 897 people/bus; Calgary’s, 979 and Edmonton’s, 858. Winnipeg Transit’s ratio is 1175/bus. Once again, the LRT system in our comparison cities will be taking a lot of pressure off their buses, so one might wonder why the ratios in these cities aren’t even smaller. The reason they’re not is because more people use public transit per capita in these cities.

Winnipeg has the third lowest per capita usage of public transit out of Canada’s 10 largest cities. Calgary scores fifth, Edmonton sixth and Ottawa eighth. A viable Rapid Transit system would no doubt increase ridership, but in the meantime, regular bus service needs to be greatly improved to attract more riders.
The West Central, North End and the growing suburban south Winnipeg communities are being populated by newcomers and aging persons who either prefer or cannot afford the luxury of owning their own vehicles. But poor service in non-peak hours and safety concerns are preventing some from using transit, and the same conditions help keep thousands of Winnipeggers in their cars when they could be taking the bus. While it is important to finish the south leg of Rapid Transit ASAP, at the same time we have to recognize that this improvement is not going to help the many living in other parts of the city who rely on transit to get to work and school, go shopping and attend appointments.

The City should concentrate on four core service improvements:
1. Increase the bus fleet by a minimum of 200. This will reduce the number of over-packed buses during rush hour and allow for more buses on feeder routes.
2. Increase the number of buses in service during off-peak hours to accommodate those who rely on public transit for shift work, getting to recreation facilities or appointments, shopping or visiting family and friends.
3. Increase security measures for passengers and operators.
4. Make a low-income bus pass, similar to the one offered in Calgary, available to Winnipeggers.

Winnipeg Transit has to improve service for two important reasons: firstly, it must meet the needs of those who rely on public transit – seniors, low-income people, youth and persons with disabilities who cannot drive. Secondly, it has to get people out of their cars and into city buses. Each of us has a responsibility to deal with climate change and the high cost of urban sprawl, but we need efficient publically-provided services so we can do our part.

Winnipeg Transit employees are certainly doing their part. They do an admirable job considering the lack of resources. In 2014 Winnipeg Transit was recognized by the Ontario Municipal Benchmarking Initiative as the top transit system in Canada -and for good reason. On any given day, it’s ‘spares ratio’ – the percentage of buses not needed to meet dispatch demands, and to allow for maintenance – on any given day is 11 per cent – compared with Calgary’s 32 per cent; Edmonton’s 30 per cent; Saskatoon’s 56 per cent and Ottawa’s 20 per cent. The total cost to operate a bus/hour in Winnipeg is the second lowest of 12 major cities, and Winnipeg’s revenue/cost ratio is the highest of the same 12 cities, at 60 per cent. In other words, more revenue from fares covers operating costs than in all the other cities, where transit requires higher operating subsidies. Winnipeg Transit’s mechanical department does all its own warranty work for Cummins Engine and New Flyer Industries, at a rate of $125 and $100 an hour respectively – another way it covers operating costs.

Let’s hope our new city council is up to the challenge.

First published in the Winnipeg Free Press January 20, 2015.
Lynne Fernandez is the Errol Black Chair in Labour Issues at the Canadian Centre for Policy Alternatives and Harry Paine is a member of Transportation Options Network for Seniors