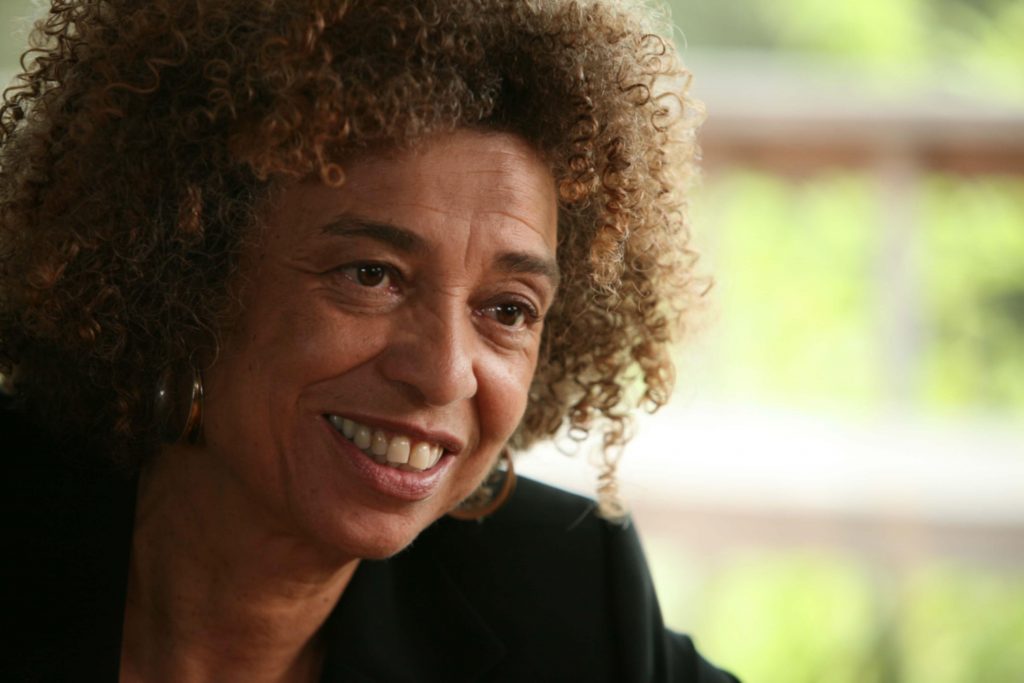 On Saturday, May 6, 2017, Dr. Angela Y. Davis will deliver a talk in Winnipeg at Knox United Church titled Race, Resistance, and Revolution: Freedom is a Constant Struggle. She will be hosted by the Canadian Centre for Policy Alternatives Manitoba office, in partnership with Black Space Winnipeg and Queer People of Colour (QPOC) Winnipeg. While it is impossible to do justice to Dr. Davis’ contributions to politics, philosophy, and social movement organizing in a short summary, this CCPA Review highlights a few moments in her life and writing as examples of the span and scope of her work.
Dr. Davis has always been both a scholar and an activist, and a model for what it looks like to tie those two forms of work together. Her experiences – as a Black woman who grew up in the south, as a member of the Communist party, the Black Freedom Movement, and the Student Nonviolent Coordinating Committee (SNCC), as a graduate student of Philosophy, and as a political prisoner, to name a few – have shaped her theorizing, which has always been oriented toward explaining the world in order to change it.
Biographies of Angela Y. Davis often start with the fact that she grew up in the southern city of Birmingham, Alabama in the 1940s and 50s, a time and place animated by organized racist violence, and Black-led activist responses. The neighbourhood she grew up in was dubbed “Dynamite Hill” because of how often it was bombed by the white supremacist organization the Ku Klux Klan (KKK). In 1963, while Davis was studying in Europe for a graduate degree in Philosophy, the KKK bombed the Sixteenth Street Baptist Church in Birmingham, killing four young girls whose families she knew. Davis uses this context in a memorable interview featured in the film Black Power Mixtape (2011) to articulate a theory of violence that reverberates throughout her life’s work in her ongoing identification with survivors of the violence of racism, patriarchy, and capitalism. When asked in 1972 whether she believes in using “violence” as a social movement tactic, she responds:

“If you are a Black person who lives in the Black community all your life and you walk out on the street every day seeing white policemen surrounding you … and you live under a situation like that constantly, and then you ask me whether I approve of violence – I mean that just doesn’t make any sense at all. Whether I approve of bombs? I mean I grew up in Birmingham, Alabama – some very very good friends of mine were killed by bombs, bombs that were planted by racists. I remember from the time I was very small I remember the sounds of bombs exploding across the street – our house shaking … that’s why when someone asks me about violence, I just find it incredible, because what it means is that the person who is asking that question has absolutely no idea what Black people have gone through, what Black people have experienced in this country since the time the first Black person was kidnapped from the shores of Africa” (Angela Y Davis, 1972)

During the 1960s, Davis studied philosophy in Europe and in the US with Herbert Marcuse, and she became increasingly involved in political organizing. From very early on in her life, she was an active member of Communist and Marxist Leninist organizations, including the Che-Lumumba Club, an all-Black organization within the Communist Party. Within the Los Angeles chapter of the Student Nonviolent Coordinating Committee (SNCC), Davis ran the “Liberation School” where she taught Marxism to community members outside a formal academic environment. In 1969, she held a teaching position at the University of California at Los Angeles (UCLA), where she was fired for being member of the Communist Party. In the early 1970s, Davis served over a year in prison for her role in a campaign in defense of two BPP members who had been held at Soledad prison since the late 1960s. After spending time on the FBI’s “Ten Most Wanted List,” she was later acquitted on all charges. Today, she is Professor Emerita in the History of Consciousness Department at the University of California Santa Cruz.
At each point of her involvement in various political struggles, Davis has offered critiques and insights that have challenged and advanced those movements. Davis engaged her peers in the Black power movement in critiques of the male chauvinism in some of their organizing, arguing that women’s oppression needed to be at the center of anti-racist, anti-capitalist organizing. In her pathbreaking book Women, Race, and Class (1983) she engaged her peers in the feminist movement in a critique of their failure to consider how the lives and struggles of Black women are different from those of white women. For example, while mainstream feminists organized around access to birth control and abortion, Black, Latina, and Native American women were dealing with an epidemic of coerced sterilization – a struggle white feminists did not embrace as part of the broader reproductive justice agenda. She challenged the feminist movement for being preoccupied with economic inequality, but failing to challenge capitalism itself. These critiques have been central to Davis’ work to make connections between different social struggles – illustrating how the oppressions of Black people, imprisoned people, the working class, and women are experienced differently, but must be understood as part of the same structural forces, and therefore must be resisted together. Davis consistently challenges narrow and exclusionary framing around social struggles in an effort to generate an ever-bigger solidarity, rooted in experiences of those at the margins.
Some of Davis’ most influential work in the past few decades has been in the global anti-prison movement. She is one of a group of Black feminist activists who co-founded the influential prison abolition organization Critical Resistance (CR) in 1997. The three key pillars of Critical Resistance are public policy, community organizing, and academic research. Its founders were united in the goal of “challenging the idea that imprisonment and policing are a solution for social, political, and economic problems” (http://criticalresistance.org/about/history/). In her 2003 book, Are Prisons Obsolete?, Davis names and describes “the prison industrial complex” (PIC) – a term used to describe the networked systems of law, criminalization, supervision, and policing that culminate in the prison itself. She illustrates how the PIC emerged directly from the the never-totally-abolished systems of slavery and Jim Crow segregation, describing how racist, sexist violence has always been a feature of so-called “modern” criminal justice practice:

“We still live with the sediments of slavery, the vestiges of slavery – abolishing the prison system today is about completing the work that was not done in the aftermath of the emancipation of slaves.” – (Davis, quoted in Visions of Abolition, http://www.visionsofabolition.org/)

Davis’ work continues to inform the work of Critical Resistance, particularly when it comes to describing why prison reform is not an adequate solution to the racist violence produced by criminalization. In Are Prisons Obsolete?, Davis asks: “Why is it so hard to imagine a world without prisons?”.  Despite the fact that prisons are relatively new institutions in the span of history, and they have never worked to make people safer, she observes that people are unable to imagine life without them. She suggests that prisons relieve society “of the responsibility of thinking about the real issues afflicting those communities from which prisoners are drawn in such disproportionate numbers” (p. 16). She outlines the project of abolition as a world-building project: a project of imagining and constructing a set of social systems and relations that do not rely on imprisonment as a response to social problems.
Angela Davis’ most recent book, Freedom is a Constant Struggle: Ferguson, Palestine, and the Foundations of a Movement (2016) continues her work of making connections between capitalism, racism, sexism, imperialism, criminalization, and border violence. She highlights connections between the apartheid wall in the Occupied Territories, and the Mexican border wall; and the identical policing weapons and tactics used in Palestine and Ferguson, MO, reminding readers that as long as capitalism and imperialism are global, so too must our social movements be global. She reaffirms the importance of radical, collective organizing by reminding us of its role in changing the course of history in the past, and tracing linkages between past and present iterations of radical politics. She also reminds us of the importance of learning from social movements of the past in order to avoid making the same mistakes again. In this task – of learning from the past in order to chart a course for the future – the breadth and depth of Angela Davis’ scholarship and experience make her an incredibly valuable teacher.