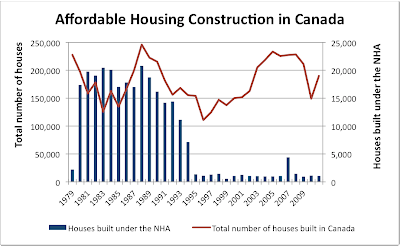 Combined with increasing housing costs and the growing gap between upper income earners and lower and middle income earners, this is putting a serious crunch on housing.

It’s no wonder that over the last two decades, the number of homeless, hidden homeless, and precariously housed people in Canada has skyrocketed.

Thanks to Michael Shapcott (Wellesley Institute) for the original chart.

← Election 2011 UnSpun
Canadian Wheat Board: Politicians Must Stand Up for Farmers →