Bill C-10: “Housing” that will lead to a need for more social housing 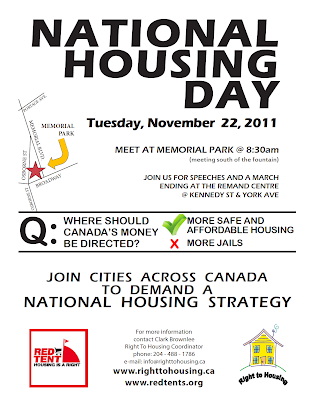 After years of complaining that Canada is the only G-8 country without a National Housing Strategy, housing advocates are finally getting their way. The federal government is passing Bill C-10, the Omnibus Crime Bill, that will effectively house people, and especially people with a mental illness who engage in crimes of survival.

But on November 22, National Housing Day, housing advocates will still be complaining! They are holding a march, in connection with many more  advocacy and front-line service agencies across Canada. These groups would have preferred Bill C-304, an Act to ensure secure, adequate, accessible and affordable housing for Canadians, but it died at the committee stage before the last election.

Bill C-10 will accomplish similar objectives as Bill C-304 would have, had it passed, albeit in very different ways. By creating mandatory minimum sentences and requiring longer sentences, Bill C-10 will house more people in jail for longer periods of time.

In a recent study of people experiencing homelessness in Winnipeg, it was shown that 24.4% of the people who were homeless had been in jail in the past year. Many people spoke about living a cycle caught between jail and street. People who were just released from jail ended up homeless because they could not find jobs, and lacked skills and resources to afford housing. Living in destitution with few options, some of these people were easily recruited by gangs to make a little money so they could afford food and shelter. Some people even said they engaged in petty crime just so they could have a warm, safe place to spend the night – a jail cell.

One man who was interviewed for the Winnipeg Street Health Report (released last June) had been kicked off welfare because he was getting his high school equivalency instead of working. He felt forced to deal drugs to make money and stayed at emergency shelters regularly. With this one ill planned and expensive government intervention, this young man will not have to worry about where his next meal will come from and where he will stay each night. Instead of a welfare rate of $555 per month to support the man in obtaining an education and becoming self-sufficient, the province can pay $4,854 per month, the cost of housing someone in provincial prison.

Housing in Canada has become a serious social, political and personal issue. About 3.3 million Canadians are living in substandard housing. It is estimated that at least 2,000 Winnipeggers are experiencing homelessness at any given time. In 2010, 510 children spent at least one night at Salvation  Army’s family shelter or at Ndinawemaaganag Endaawaad Inc. youth safe house.

Emergency shelters and jails have very similar populations. Both have become homes for large numbers of people living in poverty. The authors of the Winnipeg Street Health Report found that about 45% of the people needing emergency shelters in Winnipeg were diagnosed with some form of mental illness. The population in correctional facilities in Canada have rates of mental illness three times higher than the general population. Providing overcrowded jail cells, rather than supportive housing, is not a good solution for people facing poverty and mental illness.

Housing is a basic human right. It is critical in determining how all aspects of our lives are fulfilled. The lack of affordable housing in Canada is costly for all Canadians – both socially and economically. When a society fails to meet the social needs of all of its citizens, there is more pressure put on our healthcare and criminal justice systems. It is simple math: provincial prison costs four times more than supportive housing. When people are denied access to decent jobs and incomes, they are excluded from the economic life of our community.

There was a time, not so long ago, that Canada was admired internationally for its strong affordable housing policies. We need to reclaim our status and create a National Housing Strategy that will begin the process of coordinating efforts, maintaining political will and building the national economy. There is so much that a housing strategy could do for Canadians, and all for a much smaller price tag than Bill C-10.

But until then, expect to hear more from housing advocates here in Winnipeg, and across Canada.

Christina Maes is a Policy Analyst for the Social Planning Council and a member of the Right to Housing Coalition.

For a PDF of this Fast Facts, click here.

For more information about the march on November 22, please visit the Right to Housing’s Facebook page.

← IT’S BRANDON UNIVERSITY!
So What Happened to “Free Collective Bargaining” in Manitoba? →