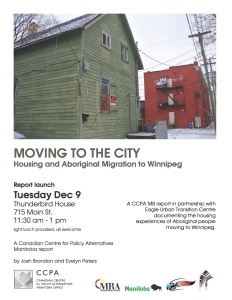 Despite being the fastest growing segment of Winnipeg’s population, a new report by the Canadian Centre for Policy Alternatives found that Aboriginal people are among the most likely to experience homelessness or live in in housing that is unaffordable, overcrowded or in poor condition.

The 46 page report Moving to the City: Housing and Aboriginal Migration to Winnipeg comes from analysis of caseloads and interviews with staff and people accessing services at Eagle Urban Transition Centre (EUTC) in Winnipeg. EUTC helps Aboriginal people find housing, employment and other services as they make the transition to Winnipeg.

“Many Aboriginal people come to Winnipeg and can’t afford the housing that is available. Without stable housing, everything else – employment, education, health – falls out of reach ” said Josh Brandon, one of the report’s authors. “The role EUTC plays in helping people find housing is vital to their success in making Winnipeg home.”

Recommendations of the report include:

The report officially launches at the Thunderbird House, (715 Main Street, Winnipeg) at 12 pm. Its authors, Josh Brandon (housing researcher for CCPA), and Evelyn Peters, (Canada Research Chair in Inner City Issues at the University of Winnipeg) will be available for comment, as will EUTC staff and participants.

The Canadian Centre for Policy Alternatives is an independent, non-partisan research institute concerned with issues of social, economic and environmental justice. Founded in 1980, the CCPA is one Canada’s leading progressive voice in public policy debates.