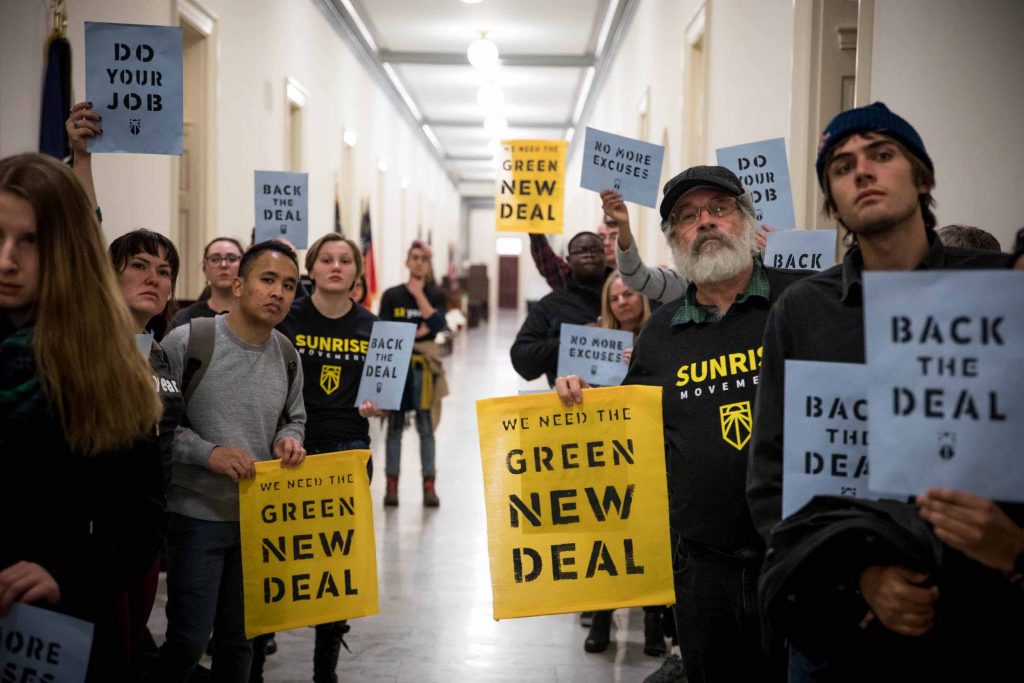 First it was 44 million, then 66 million and now 78 million tonnes of C02: every year Environment Canada increases the amount by which Canada is projected to miss its Paris Agreement target [i]. “Transitions to a cleaner future are hard,” said Environment Minister Catherine McKenna in a press conference last December [ii]. If Minister McKenna is in need of guidance, I would respectfully direct her southwards, to newly elected Congresswoman Alexandria Ocasio-Cortez’s Green New Deal—the legislation of which was just released Thursday February 7, 2019.

The essence of the Green New Deal is a swift transition to renewables that ensures equitable access to fair wage, full benefit, unionized livelihoods for all Americans. It consists of seven goals for drastically cutting carbon emissions. These goals will be met through policies that address historic inequalities based on poverty, race, and gender. And, like the original New Deal, it will be completely government funded and administered [iii].

The idea of a Green New Deal is being championed by grassroots movements on both sides of the Canada/ US border. These grassroots movements for climate action are increasingly being led by young people, because it is our lives being discounted when politicians buy pipelines. Back in December, young activists from the Sunrise Movement occupied the US Speaker of the House of Representative Nancy Pelosi’s office in support of Ocasio-Cortez, herself only 29. Sixteen-year-old Greta Thunberg of Sweden has inspired thousands of students around the world (including Winnipeg) to join her school strike for the climate. And next week in Ottawa, young Canadians will gather for Powershift, a conference spearheaded by 350.org and centred largely on building the movement for a Canadian Green New Deal.

Much groundwork has already been laid—in fact, a recent Fox News headline proclaims: “Green New Deal actually an old socialist plan from Canada” [iv]. That socialist plan in question is The Leap Manifesto, created in 2015 at a gathering of environmental, Indigenous, labour, faith, and social and food justice movements [v]. Similar plans to the Green New Deal have been put forward by Canadian organizations like Blue-Green, 350.org, the Canadian Labour Congress, Climate Action Network, supported by research and policy analysis from Canadian Centre for Policy Alternatives, the Broadbent Institute, and the Pembina Institute.

Meanwhile, the federal government’s current plan for tackling climate change is the Pan-Canadian framework, which relies heavily on taxing carbon. This reliance on market-based policy is like trying to bake a cake using only eggs. Under a Green New Deal, the government would exercise a much wider range of policy tools to steer the economy away from fossil fuels.

What would a Canadian Green New Deal look like?

A Green New Deal would create green jobs within all sectors of the economy. The federal government has pledged to double investment in clean energy research, development, and demonstration [vi]—but this focus on technology development, mainly for global export, is much too narrow. In Alberta, the Energy Diversification Advisory Committee identifies value-adding opportunities for the oil and gas sector [vii]—we need such bodies for renewable energy, as well as strategies for developing entirely new sustainable industries. We need Canadian manufactured electric vehicles (buses, trains, and personal vehicles) [viii] solar panels, and deep-cycle batteries. Expanding local value chains by greening the manufacturing sector will create more jobs for Canadians, as well as providing local supply chains to drive Canada’s own transition.

This cannot happen without policy support, including the creation of new agencies and programs supported by significant government investment; legislated targets for renewable energy expansion and strict plans for the phase out of fossil fuels (beyond coal); new regulations and standards; and feed-in tariffs and public procurement systems that help create a market [ix]. These kinds of policy tools have been exercised in support of the fossil fuel industry and the corporations that drive it for years.

The concept of a “Just Transition” is being used to describe policy measures that protect workers for whom the transition to renewables entails a loss of livelihood. Examples include Alberta’s Coal Community Transition Fund and the federal Just Transition Taskforce for Coal-workers [x]. Common measures include funding packages for community economic development, increased access to EI, support for accessing education and apprenticeship opportunities, and early retirement options [xi].

These are important considerations, but a Green New Deal would also include training opportunities in the renewable energy sector, building retrofitting, and green infrastructure installation [xii]. It would include recruitment and training programs targeted at vulnerable groups including low-income, women, newcomers, and Indigenous peoples [xiii]. These jobs would be unionized jobs with full benefits, a liveable wage, and a minimum length of employment [xiv].

The Leap also calls for the expansion of opportunities in low-carbon sectors such as care-giving, healthcare, education, and the arts—sectors that have been gutted by lack of government funding. A Green New Deal and the Leap both call for a basic income that could support the unpaid care work that is often done by women [xv], and this should be part of a comprehensive poverty reduction strategy [xvi]. As a first step, Make Poverty History Manitoba is calling for a Liveable Basic Needs Benefit, to bring all of those on social assistance to Canada’s official poverty line [xvii].

The American think tank Data for Progress also suggests a “green job guarantee” as part of a Green New Deal—that all those who want and are able to work are guaranteed access to employment [xviii]. This can be accomplished by the government, labour, and industry together—as of yet we see little of this aspect of a Just Transition from our political leaders.

Federal investment is key to the Green New Deal. These days, the role of government is often conceptualized as balancing the budget; this is a false understanding of political leadership, even in times we are not facing existential crisis.

In the US, Ocasio-Cortez proposes to finance the Green New Deal using a new public bank or system of banks as well as public venture funds [xix], options also available to our federal government. In the Pan-Canadian Framework, the government proposed the creation of the “Canada Infrastructure Bank,” which could support provinces and municipalities building green infrastructure projects [xx]. However, the initial mandate of the bank to provide low-cost financing has been sidelined in favour of attracting private sector investors. While governments can paint private investment as the cheaper financing option, private investors expect on average three times the rate of return compared to the federal government’s borrowing rate, which makes projects much costlier to the public in the long-run. A preoccupation with avoiding deficits also increases the likelihood that governments will end up privatizing public assets, again with long-term costs to the public. As an alternative, Toby Sanger, CCPA Research Associate, suggests a public bank that is seeded by government funding and borrows on financial markets at the lower public borrowing rate, backed by a federal government guarantee [xxi].

Another obvious source of funding is carbon pricing, which could generate even more revenue by tightening current exemptions (including for coal-fired power plants) [xxii].  Along the same lines, massive savings could be gained by cutting subsidies to the fossil fuel sector, which have been estimated at $350 million from the federal government alone [xxiii].

Finally, the quicker the transition is funded, the more likely this work would be effective in staving off some of the (more than economically) costly effects of extreme weather and increased natural disasters caused by a changing climate. A Green New Deal funded by federal investment, with a focus on the public good, will ensure greater public ownership, public benefits, and a wide-spread and rapid transition. The exact details of the plan can be sorted out as it moves forward, but the principles of public ownership and a just transition should be front and centre.

The only way we will solve the climate crisis is by creating an economy that is fair and just, in which everyone has access to a means of sustainable livelihood. The federal government has so far failed to produce the kind of actionable, far-reaching climate plan we need. At the 2016 NDP convention after the last federal election, there was significant support for the NDP to adopt the Leap Manifesto as its platform moving forward [xxiv]—not to do so now would be baffling. But we will not get our Canadian Alexandria Ocasio-Cortez unless we create the space for her to emerge. The Green New Deal is backed by a robust grassroots movement in the US—and here in Canada the movement is growing rapidly. Now is the time to organize—nationally (through organizations like 350) and locally (Manitoba Energy Justice Coalition). Our politicians must know that this federal election, we will vote for a Green New Deal.

Hannah Muhajarine is a Master’s student studying Natural Resource Management at the University of Manitoba, and an organizer with the Manitoba Energy Justice Coalition.

← The thin edge of the wedge: Privatization of Lifeflight
A Closer Look at Childcare Affordability in Manitoba →