Fixing our Divided City: Lessons from Youth and Elders 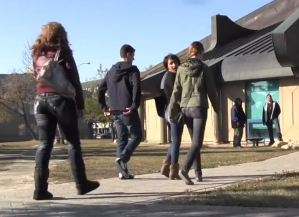 The Winnipeg Free Press headline “A City Divided” (Oct 7, 2014) and the revelation that “75 percent of Winnipeggers believe the division between the aboriginal and non- aboriginal communities is a serious issue” doesn’t come as a surprise to those of us working in the inner-city, and it certainly won’t surprise Aboriginal people.  But it is refreshing to see that Winnipeggers are finally ready to talk about it.

There is no quick fix – systemic racism runs deep.  But for non-Aboriginal people who sincerely want to ‘do something’ about the divide, they can begin by venturing out of their comfort zone.

In many ways, youth have been leading the way on this issue.

Aboriginal Youth Opportunities (AYO) is a prime example of Aboriginal youth taking the lead to raise awareness issues they are concerned about.  They are building their leadership skills, speaking out about racism, poverty, violence against Aboriginal women and children, and host of important issues. They are making a very real difference in our community and quickly becoming the leaders of tomorrow.

Another example of youth engaging in change occurred in 2012 when a group of thirty some high school students participated in a project we called “fixing our divided city”.

“Fixing our Divided City” was part of the annual State of the Inner City Report project coordinated by the Canadian Centre for Policy Alternatives.  Through several conversations with many community partners, it occurred to us that while our city remains deeply divided, and solutions are complex, much can be done by tapping into the wisdom of Aboriginal elders and the optimism and hope of youth.

The basic idea was simple.  Fixing our divided city requires non-Aboriginal people and in particular those in the suburbs where ‘fear’ is greatest, to venture beyond their comfort zone—to have conversations with Aboriginal people in Aboriginal spaces. Circle of Life Thunderbird House, located on the corner of Higgin and Main, immediately came to mind. We wondered—how many non-Aboriginal Winnipeggers have visited Circle of Life Thunderbird House?  This beautiful sacred space designed by internationally renowned Indigenous architect Douglas Cardinal is an ideal venue for bringing diverse groups together in an Indigenous setting. Full of light, with the evocative smell of sage, it envelopes you in a sense of peace and timelessness. Thunderbird House invites reflection and respect, and we wanted it to be part of our plan to bring people together.

Thanks to the willingness of a small group of innovative and open minded teachers and youth mentors, we started with a series of workshops with youth from the North End CEDA Pathways to Education program, College Beliveau and Grant Park High School. We talked with the students about their perceptions of the inner city. They shared with us their views about poverty and racism.  We talked about their hopes for the future and what they believed can be done to make the world a better place.  We viewed a film capturing discussions with Elders, who they would later meet.  The Elders talked about their experiences growing up as Aboriginal youth and the lessons they wished to share with young people.

We then brought the thirty youth, their teachers and mentors together at Thunderbird House with the elders they met through video. It was a full day of learning and sharing on a sunny fall Saturday afternoon.  What transpired throughout the day was nothing short of inspiring.

The Elders shared teachings with the youth and the group was invited to share their thoughts and ideas in a traditional sharing circle format.  There was laughter and tears, hugs and smiles as youth shared their thoughts and feelings about social issues as they perceived them.  They listened intently to the Elders stories and some youth chose to reflect on the experience on film, which is captured on the video titled “Breaking Barriers, Building Bridges”.

One Elder later described the event as “very much needed for us to learn about each other…I can’t believe we didn’t’ think to do this before”. One non-Aboriginal youth expressed concern with ”the amount of racism, the oppression, the discrimination that Aboriginals and other people of our different cultures deal with in our society.”

One non-Aboriginal youth said the day was important because “if we don’t’ share our stories we won’t be able to learn from others mistakes or our own mistakes.” Another youth summed up the day as  “an amazing experience.”

At the end of the day an Elder who was clearly moved by the experience said “ the youth have a voice and they are using it positively… they are being very proactive in their approach against racism.”  Another Elder reflected on how she was “very impressed with the youth participants” and said “I go home hopeful”.

Hopeful, powerful, inspiring are a few words that best describe the day.  But it was just one day. We need to figure out how to scale this experience up so that it happens regularly and includes a greater swath of our population.  Our city would be well served if Aboriginal and non-Aboriginal youth, inner-city and urban youth, Elders and other adults had an opportunity to come together regularly at Circle of Life Thunderbird House to share, learn and learn ways to bridge the deep divide that exists in our city.  As Winnipeg’s Aboriginal population grows, this will become increasingly important.

For many Winnipeggers, a trip to the corner of Higgins and Main will mean leaving the comfort of their suburban neighbourhoods. But anyone who has taken part in an event at Thunderbird House will know that it is a magical place where healing can begin.  For a whole host of reasons, it is a place that should be the starting place for fixing our divided city to begin.

Shauna MacKinnon is Assistant Professor in the Department of Urban and Inner City Studies at the University of Winnipeg.

Read about the “Our Divided City” project here. The video can be viewed here. A version of this article originally appeared in the Winnipeg Free Press. Photo by CCPA-MB.