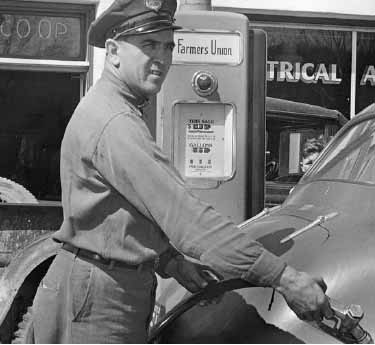 On the Main Street in Morden Manitoba there are two gas stations: an Esso and a Co-op. During the busiest times of the week-after a hockey game, or on Sunday when the area’s many churches let out-you will see cars waiting in line at the Co-op while the Esso remains virtually empty. Research shows that there are more co-ops and credit unions in rural communities compared to urban areas. These areas are also more likely to vote conservative. In the last provincial election, with the exception of three northern ridings, rural communities solidly elected blue candidates.

So why would this decidedly conservative segment of the population support what is normally seen as a left-leaning business model? Two reasons: economics and philosophy. Because co-ops pay back dividends to their members there is an obvious economic advantage. Philosophically, co-ops have a mandate to serve their members’ interests and the rise and fall of farming communities has taught farmers to value cooperation. These notions of cooperation however do not neccessarily inform policies brought forth by today’s Conservative party.

Traditionally, profits to be made in rural areas are too insignificant to draw in big grocery stores and banks. Profit maximizing entities have little appetite to do business in communities that are vulnerable to unpredictable and widely changing fortunes. This absence of large corporations leaves a space for a different business model to thrive. Cooperative business models make sense in rural communities because they are resilient to economic crises, while simultaneously holding their own during ensuing recessions. They are established on the basis that profits are directed back to members rather than to shareholders or used to pay out big bonuses to CEOs. A corporate, profit-seeking model doesn’t provide stability in rural areas because when times get hard, corporations get out.

Because the agricultural sector is vulnerable to a myriad of global variables, rural communities become the canary in the coalmine of international economic fluctuations. This vulnerability has been intensified with free trade agreements like the North American Free Trade Agreement (NAFTA) which created more challenges in rural economies that are much more dependent on farmer’s dollars than are larger urban centres. A report conducted in Minnesota found that small farms with gross incomes of $100,000 or less made almost 95 percent of their farm-related expenditures within their local communities.

Perhaps one of the most significant economic promises of the Conservatives has been their ideological commitment to opening Canada’s borders to increased global movement of capital. A philosophy, it is important to note, that is shared by the Liberal Party. Canada has signed 12 international trade agreements, signed but not yet concluded two, and has entered into nine more (NFU 2015). But these free trade agreements such as the Comprehensive Economic Trade Agreement (CETA), recently signed but not yet ratified by Europe, and the Trans Pacific Partnership (TPP) (which Trump has just rejected) are bad for rural economies. Past agreements have failed to produce the promised results of rural economic prosperity. What has happened is a substantial decline of the number of farm families able to generate enough of a profit to stay on the farm while many of those who do stay on the farm have to supplement with off-farm income just to stay afloat.

A few farming sectors have so far managed to avoid the negative effects of free trade agreements. The dairy, egg, turkey and chicken sectors derive their income through the market and do not require direct government subsidies-unlike their grain and beef-farming counterparts. This is because these sectors fall under a supply management system that regulates supply and allows farmers to collectively negotiate the farm-gate price. While most Canadian politicians have vocally supported the supply management system, the free-trade agreements that they have championed represent a serious threat.*

Additionally, another threat is now emerging by way of newly elected President Trump’s vow to renegotiate NAFTA in favour of American interests. Most recently, the US dairy lobby has appealed to Trump to target Canada’s supply management system as a means to increasing market access for US dairy products.

Individual Canadian farmers do not hold the same kind of bargaining power that multinational corporations do. CETA, TPP, and a renegotiated NAFTA will give corporations more power to turn our rural communities into ghost towns by giving foreign agricultural products an even bigger share of the food market against which small-scale farms struggle to compete. Equally worrisome for farming communities is that free trade agreements have been implicated in ‘land grabs’-large-scale land leases or purchases by foreign corporations or governments to gain access to agricultural or forest land, water and other natural resources.

The problem with free trade agreements in their current embodiment is that it isn’t really about free or fair trade at all. They are however a useful tool for corporations to undermine national sovereignty and maximize profits. NAFTA’s Chapter 11 contains the investor-state dispute settlement mechanism (ISDS), which allows foreign corporations to sue Canada when they feel that their profits are being impinged by our country’s legislation or policies. Since 1995, Canada has had to defend against 35 claims brought by foreign corporations and settled six of these for a total pay out of over $172 million in damages while spending millions of taxpayers dollars defending against these claims. Canada remains the most sued country in the developed world under NAFTA’s ISDS. Disconcertingly, the ISDS mechanism in CETA and TPP is considerably more tilted in favour of corporations than NAFTA’s.

In the United States, the economic consequences of NAFTA and other trade agreements has metastasized into a collective disenfranchisement with free trade. We cannot be encouraged however by Trump’s populist anti-free trade stance even though his scrapping of the Trans Pacific Partnership affords temporary relief for those who understood its pitfalls. While it is encouraging that a critical discussion of these agreements has made its way into the mainstream, the xenophobic protectionism that is popping up to take its place will not create better economic conditions for the majority of the globe’s citizens. To be certain, Trump’s new embodiment of trade policy will not benefit the average person and especially not Canada’s rural communities.

The Conservatives in Canada have come a long way from the Tories as led by John A. McDonald. During his tenure the notion that public institutions such as railways and hydro would be the means to competing with our powerful neighbour to the south seems downright socialist compared to today’s Conservative Party, which has moved to sell off our nation’s resources to the benefit of corporations. The Tories of the 19th and 20th centuries established the Canadian National Railway, the Bank of Canada, the Canadian Wheat Board and the CBC, all of which might come as a shock to those who vote Conservative today. Today’s Conservatives however, shut down the Wheat Board even though marketing co-operatives were particularly important for farmers in negotiating with profit-seeking corporations looking to purchase grain and livestock. Prairie farmers, who once ran the majority of Canada’s grain industry through the Wheat Board, no longer have any real economic control of the products beyond the farm gate.

The support that the Conservatives have long enjoyed in rural areas can be largely attributed to the more “traditional” values that the party espouses. Divisive wedge issues such as abortion and the abolition of gay marriage have served as a useful rhetorical tool in drumming up support for the Conservatives in rural areas. Unfortunately for these voters, abortion never gets banned, and while the Conservatives have campaigned on the promise to reopen the issue of gay marriage, with the defeat of the party’s motion in Parliament, Stephen Harper closed the books on the issue, stating that the party would not pursue it any further. Perhaps even worse for these voters is that the economic policy of the party undermines the self-determination of rural communities by favouring the rights of corporations over the farmers.

Why we vote the way we do is not an exact science. Many factors come into play. How your parents and grandparents voted is likely one of the biggest reasons. But today’s Conservative party is not the party that your grandparents voted for. The response to the failure of the Conservative party to represent the rural voter however should not be to shift towards the demagogy, bigotry, and anti-immigrant sentiment emerging in the rhetoric of some of the Conservative leadership candidates. It would behove the rural voter to remember our own grandparents were immigrants and refugees seeking a better life for themselves and their children.

Cooperation is the notion that we are working together for something bigger than ourselves. It has been crucial in developing rural areas and it is time for farmers to return to their roots of thinking collectively. But this needs to be bigger than just buying our gas at the Coop service station or banking at the credit union. It means establishing trade policies that are constructed in a way that consults and prioritizes the livelihood of family farms and supports healthy rural communities. Unfortunately, the way that Canada’s trade agreements have been negotiated tip the scales of power in favour of corporations and that is bad for rural business.
Ellen Smirl is an independent researcher and part-time farmer who divides her time between Morden and Winnipeg, Manitoba.
*New Zealand, a country that does not have a supply management system in its dairy industry, has pushed hard for Canada to give up its system yet farmers in New Zealand received some of the lowest prices for their milk in the world while the price that consumers pay is equal or higher to average prices in Canada. See Muirhead, B. 2014. Why Canada Shouldn’t Open Up Its Dairy Industry to New Zealand. Op Ed, Huffington Post (November 27 2014).
Works Cited
Birchall, J. and L. Hammond Ketilson. 2009. Resilience of the Cooperative Business Model in Times of Crisis. International Labour Organization. Job Creation and Enterprise Development Department. Geneva: ILO.

Lilliston, B. 2016. The TPP, Food Security and Climate Change. The Monitor. November/December 2016.