When British Columbia introduced its carbon tax, it provided a rebate to families to offset the higher cost of goods and services created by that tax. It designed it as a refundable tax credit that diminished in value as family income increased. As of 2017, the program provided a maximum yearly rebate of $120.40 per adult and $35.88 per child with the clawback starting at $38,880 for families and $33,326 for individuals at a rate of 2 per cent of family income.
By comparison, under its proposed Climate and Green Plan Implementation Act, Manitoba is proposing to rebate part of the revenues from its $25/tonne carbon tax in the form of an increase in the value of the Basic Personal Amount by $1,010 in 2019 and again in 2020. The Basic Personal Amount (BPA) is a non-refundable tax credit. All Manitobans can claim this amount and are therefore not taxed on taxable income below the BPA. The government was elected on a promise to raise the BPA in 2016 and re-profiled this commitment as a carbon tax rebate. The following table compares the value of these two rebates for families. 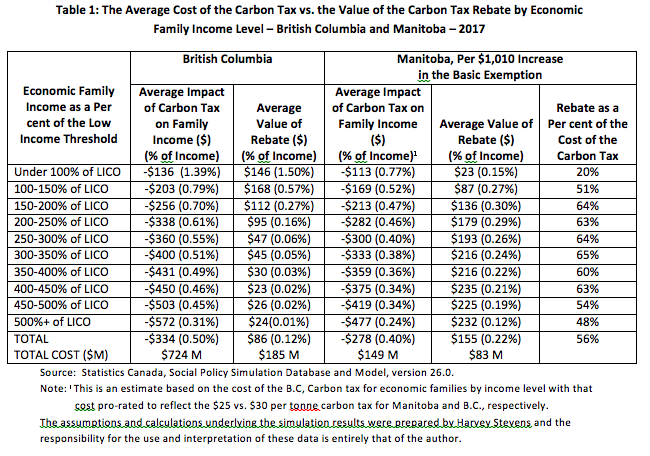 The difference in the impact of the two programs is striking. As a per cent of disposable family income, the B.C. rebate provides the greatest financial assistance to the poorest families and gradually diminishes as income increases. It more than fully compensates those with incomes below the poverty line for the loss in income due to the carbon tax. In total, it provides an average of $86 per family which represents 25 per cent of total cost of the carbon tax to families. By comparison, the Manitoba rebate provides the greatest assistance to families whose income is between 1.5 and 2.5 times the low income threshold with the least benefit going to the poorest families. And, the Manitoba program is almost twice as expensive per capita as the British Columbia program ($155 vs. $86). As such, it covers 56 per cent of the total additional cost of the carbon tax.
The key reason why the value of the Manitoba rebate rises as income rises is that higher income tax filers are able to use up more of their non-refundable tax credits in reducing their taxes payable. Filers whose income is below the poverty line have a taxable income that is only 28 per cent of their non-refundable tax credits while filers whose income is over 5 times the poverty line has a taxable income that is 93 per cent of their non-refundable tax credits. Thus, raising the value of the basic exemption benefits higher income tax filers more than lower income filers.
Were Manitoba to design a similar rebate program as the B.C. one, for a budget of $83 million, it could offer an enriched rebate featuring a maximum of $157 per adult and $50 per child. Such a program would have the following impact on family income (see Table 2). In comparing the two distributions of net rebates, one can see that a B.C.-style rebate would result in higher benefits for those families with incomes less than twice the low income threshold. 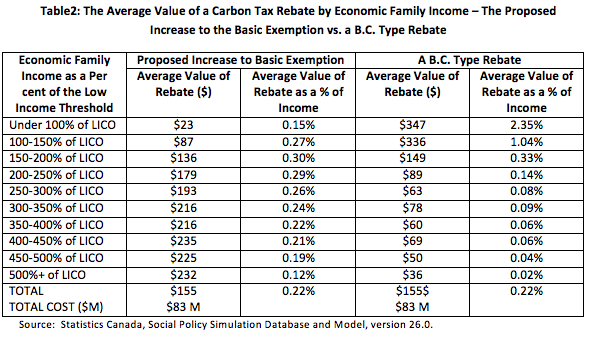 Harvey Stevens is a retired senior policy analyst with 20 years of experience with the Department of Family Services and is currently a Professional Affiliate with the Department of Economics at the University of Manitoba. He also sits on the policy committee of the Green Action Centre and is a founding member of the Manitoba Carbon Pricing Coalition.