What is happening to public education in Manitoba? 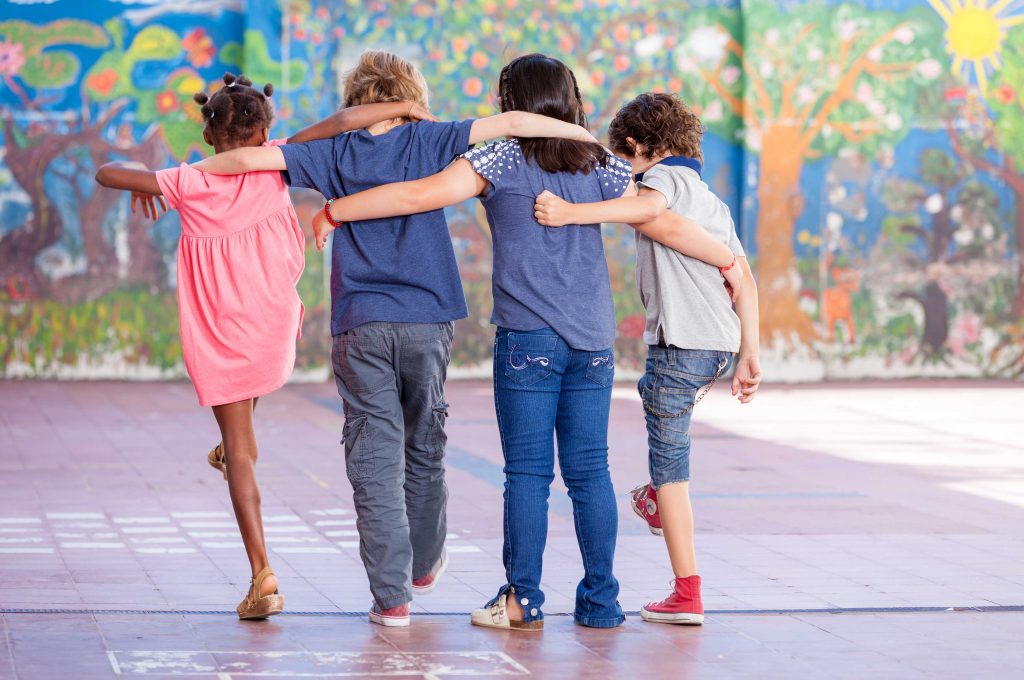 School trustees are consulting with parents and stakeholders for this upcoming year’s school budgets while they seem to be under attack by the provincial government. Education Minister Goertzen had heated exchange with Winnipeg school trustees on twitter earlier this month regarding education funding and taxes.

Buckle up. With the province’s recently announced review of public education, it seems much of the K- 12 system is up in the air. This will be an important conversation; we all want the best for Manitoba children. Education is the cornerstone of healthy, safe communities and of democracy.

Provincial funding down, enrollment up

In Manitoba, the K-12 public school system is funded by provincially and by local divisional property tax revenue. Annual provincial funding has been less than inflation since 2017/18, ie. a 1 percent increase in 2017, 0.5 percent increase in 2018 and 0.5 percent increase for this coming year. Manitoba Teachers’ Society notes that the provincial education operating funding increase for 2019/20 actually amounts to only 0.1 percent as the provincial government lumps capital and operating funding together in their funding announcements. Manitoba’s population is growing and with it the K-12 public school enrollment. The later was up about 1 percent last year with similar increases expected in the next two years.  With losses due to  inflation and increasing enrollment, provincial funding cuts are even more severe on a per pupil basis. More kids, less money equals fewer classroom resources per child.

In 2018 the province told school divisions to reduce administration costs by 15 percent and the Minister of Education tweeted recently that they will be further reduced.

The province has clawed back $15.9 million of a Tax Incentive Grant (TIG) over the past two years. The TIG is used to keep education property mill rates lower in divisions that used it. The province will be phasing out this $61 million TIG over the next five years. 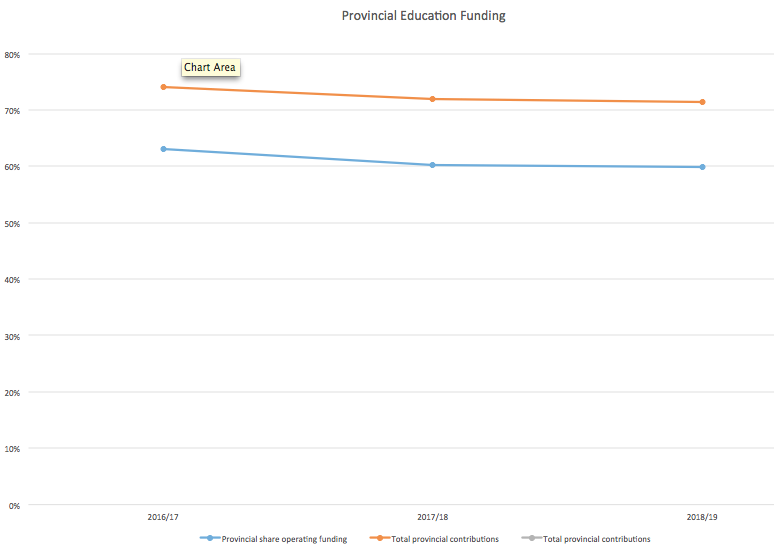 For example, the largest school division, Winnipeg School Division, has seen a cut of 0.4 percent this year due to the TIG claw back and a slight decline in enrollment. The provincial government has directed School Divisions to restrict property taxes increases to 2 percent. However provincial cuts put pressure on divisions to raise revenue where they can, via education property taxes.

The number of school divisions and trustees is front and centre in the review. Implicit in this is the local democratic role school trustees have for regional representation and levering resources (taxes) to direct to local priorities.

A recent Probe Research poll found 81 percent embrace the democratic argument in favour of electing school boards, agreeing that “Its an important democratic right for Manitobans to directly elect their own representatives to oversee their local public schools”. The poll found a majority (56 percent) opted for keeping the current amount of school boards, 23 percent would move to larger school boards and only 8 percent would prefer direct provincial management.

According to Young and O’Leary, changing the model of provincial and school taxes risks weakening the authority of local school boards: “The school board that serves as the local interface between professional expertise and public participation and accountability, without which public school educators would lose an enduring source of support and legitimacy”.

The importance of school boards’ local governance and public participation does not preclude equity in funding for education. In Manitoba, inequities across neighbourhoods and rural and Northern communities can result in inconsistency of programming available. A greater provincial contribution to public education would reduce pressure on local levies to provide basic educational programs.

With declining provincial contributions, school trustees have to make difficult decisions to make up the difference. Homeowners and renters on fixed incomes are pinched in this process. Notably the provincial tax credits to deal with this are not indexed to inflation, something the province should look into to be consistent with their approach in indexing the Basic Personal Exemption to inflation. (Homeowners and renters are eligible for an Education Property Tax Credit of $700. Seniors are eligible for an additional $470 and low income seniors another $400 on top of this).

It should be noted that other Canadian provinces continue to use property tax revenues to fund education, however they are most often set and collected by the province.

In June 2017 the province passed The Public Service Sustainability Act, which dictates wages prior to the collective bargaining process as a two year wage freeze and then a 0.75 percent increase in year three and 1 percent in year four. The province intends to introduce legislation to move to province wide bargaining with teachers in the next few years. Collective agreements expired for all 38 public schools teacher bargaining units last June. Currently teachers are in local negotiations and if not resolved, this would go to interest arbitration.

The Manitoba Teachers’ Society is part of a broad coalition of 28 unions, the Partnership to Defend Public Services, legally challenging whether The Public Service Sustainability Act is compliant with Canada’s constitution, the Charter of Rights and Freedoms. The first hearings at the Court of Queen’s Bench are in November 2019 and this may not be resolved until it reaches the Supreme Court of Canada many years from now. In the meantime, workers’ rights to free collective bargaining are violated as the wage freeze and subsequent small increases are imposed by the province.

All of these efforts are part of a larger plan by the provincial government to constrain public funding for education. It is this context that led to the Review of Public Education.

On January 23rd, 2019, the Minister of Education announced a review of public education in Manitoba. The commission is being heavily criticized for not having representation from Indigenous people, newcomers or people with disabilities.   The commissioners’ photo released by the province appears shockingly white.

The commission is co-chaired by Clayton Manness, former Provincial Conservative Education and Finance Minister. Manness called his former government “gutless” for not substantially reducing school divisions in the 1990s. Co-Chair Janice MacKinnon, former Finance Minister under NDP Saskatchewan Premier Roy Romanow is known for her conservative views. In a recent report, “Putting the Alberta Budget on a New Trajectory” MacKinnon and her co-author Jack Minz call for “common sense” approach which includes “moderating” public sector wages, lowering administrative costs and tax reform, among others. Notably absent from the paper are ideas for revenue and no mention of Alberta finally introducing a provincial sales tax. It appears MacKinnon is biased toward spending cuts.

Operating funding in Manitoba is not a stated part of the provincial education review but it is a priority of the Minister, which will invariably be affect the review somehow. Minister Goertzen’s twitter feed attacked Winnipeg School Division trustees, stating on Feb 15 that, “I’m sure that the WSD trustees will continue to work hard on their budget looking for efficiencies. The province will soon be issuing administrative spending reductions for divisions. The result of the budgeting will be instructive to that and to the K-12 review.”

The provincial government’s opinions on education policy are demonstrated in its 2019 Pre-Budget consultation survey questions on education, with leading questions about reducing the number of school divisions, reducing management, reducing bargaining units, reducing spending and using a “value for money” lens. “Value for money” is a framework used by auditing firms such as KPMG to economize and find accountability. Considerations of equity – making sure everyone has the tools they need to succeed – is not given weight within a value for money framework (Smirl, 2018).

The Manitoba Centre for Health Policy (MCHP) finds that we need to go beyond educators to get to the root causes of Manitoba’s ratings. Marni Brownell and Nathan Nickel found in 2014 that 86 percent of Manitoba’s students perform at the expected level. MCHP attributes the 14 percent who do not due to poverty and family disfunction. Manitoba consistently has one of the higest rates of child poverty, which is a much more significant indicator of school success than prenatal health, health at birth and preschool health according to the MCHP.

There is a vast global literature over many decades that consistently finds that children’s educational outcomes correlate strongly with socio-economic status. As Bronell, Fransoo and Martins put it: “socioeconomic  status is the single most powerful predictor of educational outcomes.”

Improvements for students being left behind relies on a strong education system and a comprehensive anti-poverty strategy including social housing, early childhood education/child care, decent jobs for parents, health and mental health supports and neighbourhood-based recreation programming. However the province is in violoation of the Poverty Reduction and Social Inclusion Act as it has had no provincial poverty reduction strategy for the past two years.

The stark lack of such a strategy is unjust and problematic, and even moreso while the province overhauls the health and education systems. Notably the Manitoba has not signed the bilateral housing agreement with the federal government. Moreover, Minister Goertzen lead the largest overhaul of the health system, resulting in cuts to services, before he moved on to Education.

As the province cuts funding to education and introduces a commission to overhaul the education system, it is important to stay informed and participate. The future of our children’s education is at stake.

Manitoba’s Comission on  Kindergarden to Grade 12 Education is receiving submissions until May 30, 2019 emai: K12educationcommission@gov.mb.ca . The Commission’s report is expected in February 2020.

Molly McCracken is the director of the Canadian Centre for Policy Alternatives – Manitoba.

MacKinnon, Janice and Jack Mintz. Putting the Alberta Budget on a New Trajectory. The School of Public Policy Publications. https://www.policyschool.ca/wp-content/uploads/2017/10/AB-Budget-New-Trajectory-MacKinnon-Mintz-final.pdf

Smirl, Ellen 2017. Between a Rock and A Hard Place: Challenges in Measuring Value and Impact in Community-Based Programming. State of the Inner City report 2017. Winnipeg: CCPA Manitoba. https://www.policyalternatives.ca/sites/default/files/uploads/publications/2017/12/SIC%202017.pdf