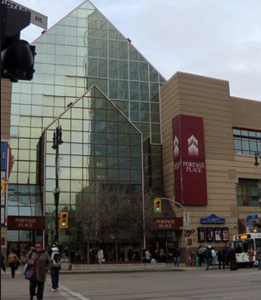 Community Seeks Specifics on Consultations and Parameters for Next Steps

A coalition of over 35 concerned community organizations and advocates is calling on the federal government to release details of its consultation plan to ensure community stakeholders’ voices are heard regarding the proposed sale of Portage Place Mall.

Last month, the North Portage Development Corp. announced a deal to sell the mall, along with its underground parking lot, to Starlight Acquisitions Ltd., a Toronto-based real estate developer. Despite community concerns over loss of public stake in the property, and the importance of the asset to downtown communities, especially Central Park, both the City and Provincial government rapidly approved the deal with little to no public consultation.

By contrast, the federal government has announced it will hold off approving the deal 30 days to allow for community consultations. More than halfway into this timeframe, Ottawa has yet to reach out to the users of Portage Place and to the communities surrounding the mall, and has yet to make its consultation plans public.

While media reports have also referenced treaty obligations as reasons for the delay, calls to Member of Parliament Robert Falcon Oulette’s office as well as Navdeep Baines, Minister of Innovation, Science and Economic Development for clarity have come up empty.

“Community has spoken out strongly, especially at the recent city council meeting on the importance of the public investment in this property, its value to the local and broader neighbourhoods. Yet no level of government has to date actively sought community input on this sale, nor altered plans according to community feedback.”

“It has been a hopeful turn to hear that the federal government may be offering a doorway for this participation- we are looking for this opportunity and look forward to supporting this process. We are requesting that their consultations on this matter foreground the central park community and wider community of citizens who experience socio economic marginalisation and actively seek their participation.”

“We have a real opportunity here to ensure that the pathway forward serves community interests- as has always been the wish for this property. We look forward to receiving clarity about next steps in this process.”

← Red River College Decision Part of a Pattern of Bad Decision-Making
Re-establishing their Lives: Issues Relating to Affordable Housing for Women and their Children Escaping Violent Relationships in Northern Manitoba. →