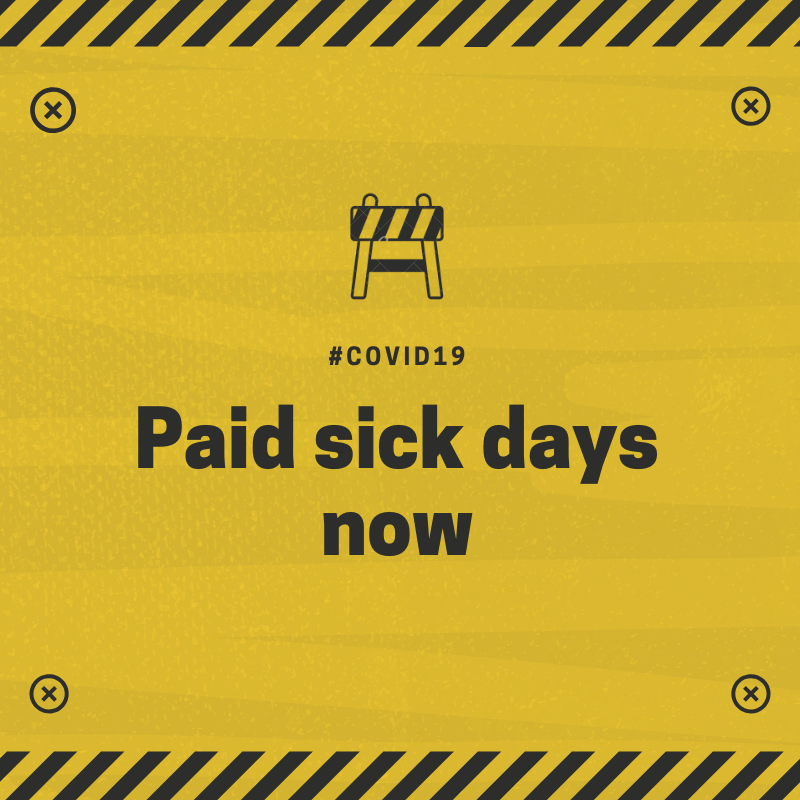 In the COVID-19 crisis workers are being urged to stay home and self-isolate if they feel sick or have been exposed. But emergency supplement in the provincial budget released on March 19th does not include anything for workers. Only 38% of sick leave and 23% of family responsibility leave in Canada is paid. The Manitoba Employment Standards Code does not require employers to pay their employees during periods of illness and only guarantees workers three days of unpaid sick leave per year. Low-wage workers are least likely to receive any paid sick leave, making them especially vulnerable.

Low-wage workers are over-represented in sectors in which they cannot work from home such as retail and food services. This places them at higher risk of being exposed to the virus. Women and racialized workers may be at even higher risk of being exposed as well as losing income since they are over-represented in low-wage work, and specifically in retail or food service work. Even with the new federal benefits, if they are exposed to the virus workers will have to make a tough decision to withstand financial hardship of staying home without pay. Some may choose to ignore public health warnings and keep working, which has frightening implications for both the health workers as well as community spread of the virus.

The recent announcement by the federal government of $27 billion dollars in support for workers and business during this crisis is a welcome one. Canadian Centre for Policy Alternatives (CCPA) National has analysed what the federal emergency policy response means for workers. These emergency measures however will fail to improve the plight of low-wage workers in a long-term meaningful way.

The reality is that many workers, and particularly low-wage workers, are barely scraping by. A forthcoming CCPA Manitoba report on minimum wage and the cost of living shows that the current minimum wage of $11.65 is insufficient to meet the basic needs of many minimum wage workers in Manitoba. This research found full-time minimum wage earners of all of family types had insufficient disposable earnings to escape Canada’s official poverty line.

We interviewed 40 Manitoba minimum wage workers and heard stories of workers having to choose between paying rent or buying decent food. Food security plays a major role in broader public health issues, including the ability of the population to stay healthy, particularly for those with existing health issues such as diabetes or cancer. Some workers reported being forced to live in over-crowding situations such as workers squeezing three people into a one-bedroom due to the high cost of rent. Given what we know from health officials about the importance of social distancing, cramped living conditions do not bode well for reducing transmission of COVID-19.

At the provincial level, some provinces are taking much bolder action to protect workers than Manitoba.  Last week, Alberta pledged to provide 14 days of paid leave for workers who self-isolate due to the novel coronavirus or who are caring for someone with COVID-19. The Manitoba Federation of Labour released a letter on March 19th calling on Manitoba to do the same, adding it should be extended to those caring for sick relatives. The Alliance for Healthier Communities in Ontario called for 14 days of paid sick leave due to COVID-19 plus seven days permanent sick leave. Ontario recently announced that it would halt evictions in the wake of the crisis while Quebec will be providing income supports of up to $573 a week for workers ineligible for other income replacement programs.

Grocery and other essential workers should be declared essential and provided with protective equipment, such as masks and gloves, and child care available says UFCW Local 832.

In summary, the Province of Manitoba should:

Temporary responses however, will remain insufficient. Permanent changes that provide all workers with paid job-protected sick leave are required and are possible. Darden Restaurants, the company that owns Olive Garden and other restaurant chains announced that it would be providing all hourly employees with permanent paid sick leave. The Province could support permanent paid sick days through legislative changes and encourage businesses to better support their workers. It is also time that workers are paid enough to afford decent housing, good food, and a standard of living that promotes healthy living. Our upcoming report shows how raising the minimum wage to a living wage is the first step to achieving this.

COVID-19 is revealing stark inequality between classes of workers that will get worse unless governments at all levels work to address it.  Despite being some of the lowest paid workers-the drug store, grocery, and food prep workers- are considered ‘essential’. COVID-19 demonstrates that these workers deserve a living wage, decent job protections and benefits. Crafting both emergency response and permanent long-term changes to labour policy that creates precarious working conditions is not only the right thing to do for workers, but also the right thing to do to ensure a healthy workforce and community now and into the future. The time for the Province to act is now.

Ellen Smirl is a community researcher with the Canadian Centre for Policy Alternatives – Manitoba.