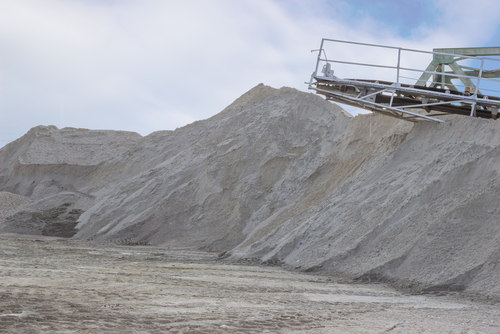 There are important new developments regarding the proposed frac sand operation adjacent to Hollow Water First Nation on the east side of Lake Winnipeg that will have a large impact on the entire project.

Canadian Premium Sand (CPS), a publicly traded and Canadian-owned mining company, received an Environmental License from the Government of Manitoba in early 2019, which allowed CPS to proceed with the construction phase of a frac sand processing facility and the mining of 1 million tons per year of frac sand on a designated community trap line adjacent to Hollow Water First Nation.

The processed frac sand would then be transported by trucks, from the mine location to Winnipeg, where it would be transferred to rail to be used in fracking operations for the oil and gas industry throughout North America.

CPS estimates that the capital cost of getting this project up and running would be around $300 – $335 million, and the project would require approximately an additional $29 million per year in operating costs thereafter.

In addition, CPS has yet to estimate the unforeseen costs as a result of having to meet the 98 conditions in the Environmental License they received from the government of Manitoba. These costs are substantial but unknown.

In a 2018 Investors Presentation, CPS based the economic viability and profit margins of its entire frac sand project on selling the frac sand they produced at between $150 a ton (low end) and $250 a ton (high end). The problem for CPS is that, based on the most recent market analysis done by a number of market research firms, frac sand is now selling for less than $30 a ton in North America.

Moody’s, one of the largest bond rating agencies, has stated that the market price for frac sand will not change in the foreseeable future as there is a large over supply of frac sand in the North American market which is driving down prices. At this price CPS cannot even cover of its annual operating costs of $30 million, let alone begin paying down the start-up cost of $300 – $335 million associated with getting the whole project up and running.

Obviously CPS has seen the writing on the wall as they have not made a Final Investment Decision to proceed with construction phase of the project and recently announced they were undertaking a Cost Optimization Study to reduce their total expenditures related to the project. This study is to be completed by September of 2019.

Some insight as to where CPS is headed with this Cost Optimization Study was obtained recently from local community members in Hollow Water First Nation, where there was an information meeting held with a select few people in the first week of September. At this information meeting it was learned that CPS is now toying with the idea of barging wet unprocessed sand to Gimli, on the west side of Lake Winnipeg, where an operating rail line exists.

If this new plan proves to be accurate, then this would be an entirely new project, and one that is radically different from what CPS proposed to the government of Manitoba back in early 2019, and for which CPS received an Environmental License for.

It would also mean that the 127 jobs that CPS stated would be created in the region would disappear, as they would not be constructing a processing facility at the proposed mine location, nor would they be transporting processed frac sand via truck from the mine site to market.

Further, there would be far more federal government oversight required should CPS choose to barge unprocessed frac sand via Lake Winnipeg to Gimli, as this body of water is federally designated navigable waters. The Department of Transportation would also need to approve the barges needed to ship this unprocessed frac sand to Gimli. The Coast Guard I am sure would have some regulatory interest, as well as the federal Department of Fisheries and Oceans.

Finally, there are a whole host of new potential adverse impacts that would need to be identified and addressed before CPS could move forward with this new plan. At the end of the day, CPS is unlikely to be able to reduce their costs to the level needed to make a profit, given the current low market price for frac sand, even if this new plan were to be in place and approved.

Clearly, CPS has some very tough decisions to make in the months ahead.

← UNSPUN 2019: Access to Post-Secondary Education at Risk this Manitoba Election
The sky will not fall with a higher minimum wage →