Changes in practices necessary, if serious about reconciliation 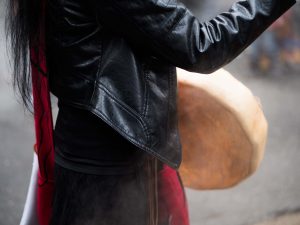 Offer money to leaders in a cash-poor community to gain support for a resource extraction project. Publicly shun and disenfranchise individuals who don’t agree. Deceive people into signing their support without full information. Divide the community. Commence destructive preparation of the project site before proper decision-making processes are complete…Situate this project on traditional indigenous territory.

Much of Canada’s historic wealth was built on these kinds of practices. Sadly, in this so-called era of reconciliation, they continue. And not far from where many of us live in Winnipeg.

This scenario was described by Hollow Water First Nation (HWFN) members Lisa Raven, Reg Simard and Drey Smith at a recent event about Canadian Premium Sand’s proposed Frack Sand development near Hollow Water First Nation, on Treaty 5 territory east of Lake Winnipeg. They all care deeply about their community and the land, and they are expressing serious concerns.

The project has many drawbacks, including health and environmental impacts of frack sand processing on workers, nearby communities, water and land; and concerns about heavy truck traffic on the winding Highway 304 and the extremely busy Highway 59. Not to mention the folly of supporting more fossil fuel infrastructure when urgent transition to alternatives is required to avoid the worst of climate catastrophe.
Of grave concern as well, is the disrespect shown by both the company and the provincial government to the community.
This project requires an environmental licence and therefore its potential environmental and human effects must be identified and fully addressed prior to proceeding. It also requires a Section 35 Crown Consultation which must seek to accommodate and substantially address the concerns of local indigenous people.

Both processes are now underway, but they stray far from meeting the letter and the spirit of the laws that created them. No licence has yet been issued, but a road has already been cleared and exploratory work done precisely on the area of the community trap line, a key place for traditional activities. HWFN Chief and Council support the project, including discreetly waiving rights to the necessary Section 35 Consultation for the exploration work and road, but they do so without the informed consent of the greater community.

Drey, Reg and Lisa described how many people in the community are only now learning about the project. They reported tension as local opponents have been intimidated and in some cases, have lost their jobs. Unsubstantiated rumours abound about possible benefits, like a much-needed new school, and injections of money into the cash-strapped reserve. Children, we hear, are upset about the destruction of their forest play areas, which are also their families’ spiritual homeland.

From the start, the company has provided only vague, incomplete and conflicting information, meaning that any Manitoban following the issue cannot know its full implications. Meanwhile, the Technical Advisory Committee (TAC) – government representatives with expertise in various areas – has identified serious problems with CPS’s proposal, including the very real dangers of silica sand processing. Their concerns have raised red flags in HWFN, other First Nations and other settlements in Treaty 5. The company and the TAC continue discussions. Why would the government not wait until these questions are resolved before allowing destruction of the community trap line, and before embarking on the Crown Consultation on the overall project, so that community members could participate fully informed?

In this indigenous community, as in any community, especially those facing duress and change, opinions will vary about resource developments. Some will have reasons to be in favour, and some will have equally valid reasons to be opposed. As a non-indigenous settler person, I don’t pretend to have answers for Hollow Water First Nation. In my view though, the government failed to carry out due diligence in discerning whether Chief and Council had broad community support for this project.

As I write, community members are entering the 6th week of a vigil at Camp Morning Star – a tipi and sacred fire set up to honour and protect the land and educate about the disregard shown to the community around the Frack Sand development.

I am a Treaty person (as are we all who live here). I believe we have responsibilities to our indigenous neighbours who are impacted by resource development. At minimum, we can demand that our governments practice the basic tenets of reconciliation, one of which is the right to “free, prior and informed consent…” as described in the UN Declaration on the Rights of Indigenous Peoples. Canada’s history has been one of exploiting resources, at the great expense of the indigenous people who lived and continue to live on the land. That history has contributed to the displacement, poverty and pain that haunt many indigenous people today.

At this moment, with growing knowledge about the crimes of the past, we can change that relationship in both small and large ways. In the instance of this development, the government can choose to have a public Clean Environment Commission Panel review of the project. A Panel review would ensure transparency of information and would allow all members of Treaty 5, and any Manitoban, the opportunity to participate in the discussion. Ensuring meaningful public process for resource developments that include “full, prior and informed consent” will be a step by the government of Manitoba toward meeting the principles of reconciliation.

Anne Lindsey is formerly the Executive Director of the Manitoba Eco-Network, a long-time activist and a Canadian Centre for Policy Alternatives Manitoba Research Associate.